The Far North of Cameroon is grappling with a humanitarian crisis directly affecting nearly 2.1 million people. In January 2019, an upsurge in nightly Boko Haram incursions targeted several Cameroonian villages on the border with Nigeria, burning more than 300 houses, destroying or looting the community’s crops. They also destroyed means of transport, schools and a church.

2,400 people (approximately 400 families) lost everything in these attacks and were unable to meet their basic needs. Several members of the affected communities took refuge in neighbouring villages, and others in the nearby forest.

To meet the emergency needs of populations affected by Boko Haram violence, an immediate and unconditional monetary response was offered to affected families in the villages of Guitsenad, Toufou, Roum, Ngossi and Zhéléved. The beneficiaries were identified in a transparent, open and participatory manner through public consultations, using appropriate vulnerability criteria validated by the communities targeted by the project.
This project enabled affected families to meet their basic needs with dignity, giving them the means to get back on their feet after their shocking, devastating loss.
This intervention in Cameroon was possible thanks to the financial support of the Ministère des relations internationales et de la Francophonie (MRIF). 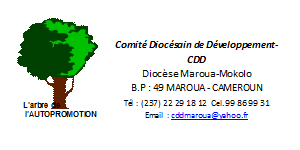